Quote from Slave Labor in the Capital, page 124

At the end of 1795 work in Washington drove one of Greenleaf’s building contractors insane and his wife wrote to Greenleaf cursing the day she and her husband were lured to live and work in the new city. Isabella Clark didn’t stint on the colorful language when describing her neighbors all trying to cash in on Greenleaf’s building projects: “Miscreant Junto of Gipsies, French Poltroons, Dolts, delvers, Magicians, Soothayers, Quacks, Bankrupts, Puffs, Speculators, Monopolisers, Extortioners, Traitors, Petit foggy Lawyers, Ham Brickmakers, and apostate Waggon Makers.”

She didn’t forget the African Americans on the scene. They were the “Ham Brickmakers.” That suggests that those supposedly black and enslaved because of Noah’s curse on his son Ham made more bricks for the contractors than the brick machine. But her colorful description doesn’t help us distinguish between slave and free brick makers

I found this letter in the microfilmed edition of John Nicholson's papers. Isabella wrote to James Greenleaf who had copies made of the letter and sent them on to Nicholson and Robert Morris. Greenleaf had hired her husband Joseph Clark, the noted Annapolis builder and Grand Master of the Freemasons in Maryland. He spoke at the Capitol cornerstone ceremonies in 1793 which is probably where he met Greenleaf.

Clark went mad prompting his wife to write this letter. In a nutshell, Greenleaf overvalued the building materials he shipped to Clark to make the house he contracted to make for Greenleaf. Thus while Clark was expecting cash payment for his completed work, Greenleaf was expecting reimbursement for the materials he shipped. Greenleaf had clerks and lawyers and even a French consultant on the scene keeping an eye of Clark and the other contractors Greenleaf hired. Plus since everyone from the President on down thought Greenleaf was a millionaire not a few small time operators tried to get in on the action was sure to create.

I apologize for not having the complete letter and better quality scans, but time, expense, and the technology of the late 80s....

As the letter indicates, the Clark did own slaves, selling three female slaves to help finance their move to Washington, but I didn't find solid evidence that he owned slave workers or hired them. However, in 1790 Clark got a friend to write to President Washington who he assumed was looking for someone to build the new capital city. In an 2 August 1790 letter to the president, A. C. Hanson of Annapolis mentioned "the attachment and obedience" of Clark's workmen.

[We had] resources that enabled us to keep a Handsome and Plentiful Board, which ever echo'd the most Hospitable Welcome to all who were acquainted therewith. I am Sorry to say it now that our Board had too many acquaintances by all - for as you have bereft us of all our Health, Peace, Ability, Character, Credit, Money, Property and Livelihood in ten Months - I have found, that such is the depravity of Human Nature, that those Wretches that were once proud to be enrolled as our Friends, and others as our acquaintances are gone with the Property you have divested us of.

In June 1794 we Sold our House, our Store of Merchandize, Three Female Slaves, also about one half of our Household Furniture, not to pay our Debts, for we owed none of consequence, NO, but to carry the money to Greenleafs Point - we had in addition upwards of four thousand dollars in paper Money, and I had sixty one half Joes long hoarded up; All is gone since the 6th of June 1794; with a multiplicity of other valuables, and to my Knowledge, on your account; Why gone! Gracious God only knows - Hundreds beside myself, can verify that my Husband Laboured during the intire progress of his operations for you, with Body and mind with uncommon Industry, and so did all his Servants, and Workmen, with an exception of that Apostate of all vile Apostates, who you seduced to treachery.

My poor Husband losses of his property, his ability, time, and labour were trifling, compared to the Insult that was offered to him and myself - My Husband was decoy'd into an imprisonment, and was there beset, insulted and threatened with his Life by a hired Banditti. You sent an hired french fellow; a french Mutilated Aristocrat, a french Poltroon, Miscreant Ruffian, for sure none but such a one would have undertook to assault, insult and abuse me when intirely alone and in my own House, as he did.

I address you in the language of an injured, Insulted, distressed woman whom you have brought to extreme misery, to a poor Hovel in Old Town, without money, property or credit with an helpless Husband, whose intellect you have deranged, by your vile Treatment, to insanity; with seven small children, white and coloured, and two Old Faithful Servants, and no means to procure them Food. I was obliged to sell part of my Furniture to bring away the residue with my Children & Servants from that Island of Bubble, Deceit, Horror, Poverty and Desolation, vauntingly dubbed Greenleafs Point - Four fifths of my Furniture and my Trinkets I have already sold, and this day I sent a bed to vendue to raise money to buy food for my family - I have long expected an Opportunity to address you in Person, as your Reporters on Baneful Point, have yelped many months, ye were all to be there to pay your Arrearages. Had you come I would have your Eyes and Ears witness the Woes you have overwhelmed me with, in defiance of all opposition of the numerous Miscreant Junto of Gipsies, French Poltroons, Dolts, delvers, Magicians, Soothayers, Quacks, Bankrupts, Puffs, Speculators, Monopolisers, Extortioners, Traitors, Petit foggy Lawyers, Ham Brickmakers, and apostate Waggon Makers.

One of you had the impudence publickly, but when my Husband was not present, to explain "he would throw my Husband neck and heels into Jail" he had done me and my Family manyfold Service thereby, had he verified his Threat, but in lieu of that Threat, he with his Myrmydons have been ever since murdering my Husbands Intellect by Minutia. He had also the Vilainous assurance to make a public outcry against my Husbands Honesty - the Yankee wretch, the Mountain Merchant, whose honesty could not be underwrote for 100 per Cent - I know but little of him, but I know too much by all - I ask him if it was honest in him to Monopolise all the Materials that he could on Baneful Point and then Partially sell them out in the most egregious extortion. I ask him, if it is not shameful Reflection on his conduct, his understanding and his Honesty to seduce our servant to Treachery and by bribing him with the high salary of 8 Hundred Dollars per Year; Where the Servant was, at the same time, under contract to serve my Husband for less than 4 Hundred Dollars per year. I ask him if any Man who means Honest, would employ, on Baneful Point, upwards of Twenty, at a high salary, Gipsies, French Poltroons, Dolts, Delvers, Magicians, Soothsayers, Quacks, Bankrupts, Puffs, Speculators, Monopolisers, Extortioners, Traitors, Petty foggy Lawyers, Ham Brickmakers and Apostate Waggon Makers - I ask him, whether Fame says he was Honest in his Statement with his Partner (I do not mean his Wife) who fostered and fathered him - I ask him, if he did not Puff his Honesty to my Husband on that Circumstance - And I herein declare that some of his Miscreant Minions, on Baneful Point, have in my presence Puff'd his trickyness on that settlement - I have much more to wring his Wretched Heart - But let the simulating, incontinent Yankee mumble this -
However, I shall take a further Liberty, to ask him, if an Honest Man would take another Man by the Right Hand & cordially shake him and at the same time Exclaim "My Joseph Clark I believe you are an Honest and Worthy Man - Altho, at the same time, it was despicable simulation and he had in Keeping a Multitude of Myrmydons to tre---- him - I can not Help informing you, that a wretch, a William King of George Town, who my poor Husband raised from poverty and obscurity and who, at the time of our Removal to Baneful Point, owed us upwards of Twelve Thousand Dollars - Has lately, in Lieu of paying me a Dollar, rendered me a short statement bringing us in Debt, on a pretence he furnished nails, locks, hinges, tools and Chicanery & swindling only knows what, on my Husband's proper accounting & writes, he does not know Morris, Nicholson & Greenleaf - Yet for many months he trumpetted publickly that Morris, Nicholson & Greenleaf owed him more money than would build one Front House -

I could recite to you multitudes of such cruel instances of the depravity and vilainy of Mankind that I have experienced through you, within the last ten months, but let these suffice for the present, and I hope to hear from you & receive some supply to maintain my helpless Family, and Let me assure you, it will be no discredit to you to correspond with me. For Truth can verify that I am intitled to declare that I Boast a Chaste, Idolatrous Love to my Husband. I Boast an Unbounded, Parental Affection & Duty to my Children; I Boast Charity, Humanity, Universal Love to all the Virtuous Citizens on the Terrestial Globe; I Boast an Honest, Industrious Scotch Descent (A Ferguson) I Boast an unsullied Honour, Honesty, Sincerity - I am Void of Artifice, trick, Dissimulation & simulation - And if you wish my Maiden Character, I refer you to your Neighbour Mr. Edward Fox, Philadelphia, to whom I have taken the Liberty to Inclose a Copy of this Letter, and who I am sure, will forward to me such Relief as your Humanity, Honour & Honesty will posses him with - I am truly as you have rendered me and what this Epistle addresses & Call Relates, An Injured, Insulted. Distressed, Aggrieved and Hapless Woman with a numerous helpless Family,

PS - I am informed that among other Debts due to us at Point Bane, that, that Simmons owes Us about Two Thousand Dollars; I intend to write to Messrs Vidler & Jackson to make out the Account. It has been hinted to me that he intends to fob off payment, under the pretext that the Demand should be made on Greenleaf; who I am informed has no more to do with it than you have. 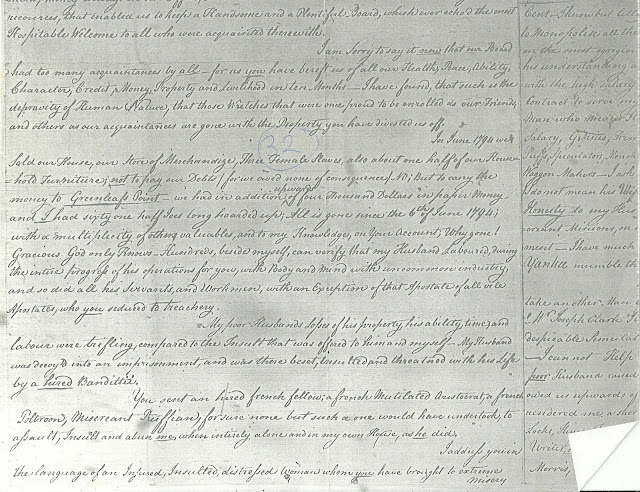 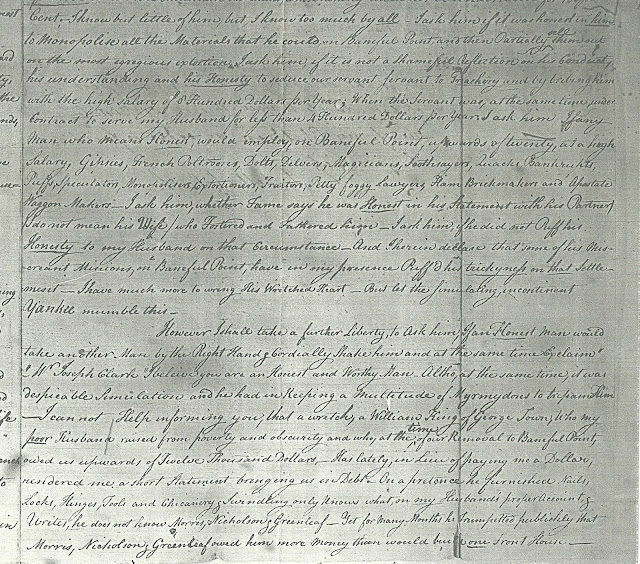 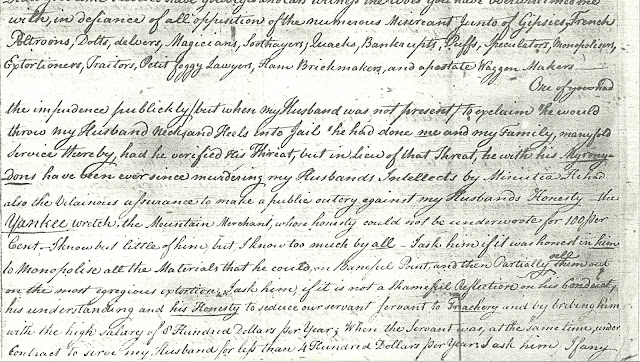 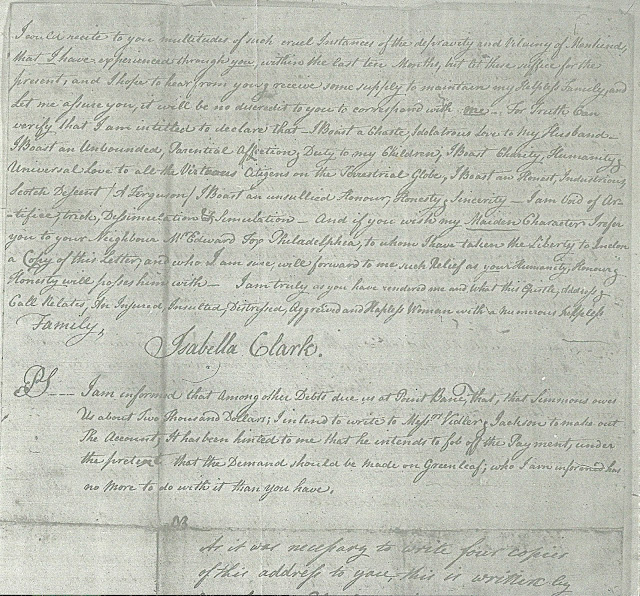